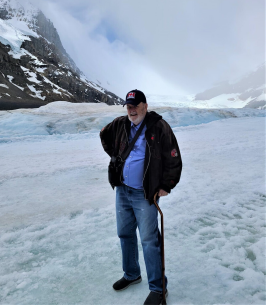 On Wednesday September 21st, almost three years to the day after the loss of his wife of 49 years Lynn, Robert (Bob) Paul Mercier passed away peacefully after a many months long battle with cancer with his sons Don and Rob and daughter in law Kristi at his side.

Bob was the proud father of Rob (Kristi) and Don (Seana), beloved Papa to Mikayla and Dominic and friend to all who met him.

Born May 27th 1943, Bob grew up in Belleville and had many stories about the summers of his youth when he traveled to Alberta and worked at the Jasper Park Lodge as a caddy, and later as a bus driver. Bob, while on crutches, had his first date with the wonderful lady who would become his wife, Lynn at Expo 67. They later married and lived in the Montreal area until moving with their son Rob, and his mother-in-law to Oakville in 1979. Bob and Lynn, along with their two sons spent almost every summer while the boys were growing up in New England with their lifelong friends Pat and Bob Nash and their family. Over the last few years, Bob rekindled his love of trains and spent countless hours building an elaborate model train set at his home.

Bob had an amazing life, and worked for most of it for the Royal Bank of Canada doing international banking traveling across Europe, the Caribbean, and South America, and then later as a self-employed computer programmer. After coming out of retirement, Bob worked at the Home Depot in Oakville while living with his youngest son Donny and wife Seana, and then later for the Home Depot in Orangeville after moving up to ‘the farm’ in Belwood with his oldest son Rob, and wife Kristi.

Bob was always very involved in sports and his community. Before having kids, Bob coached hockey and then later was both a hockey and soccer coach for his two sons. Bob was a Kiwanian in Oakville, and later a Lion in Belwood. Bob is well known for always having a ready story from his past to share, and we will miss hearing some of his favourite ones...even the ones that we had heard countless times already.

The funeral will be held at St. Joseph's Church in Fergus on Tuesday, September 27th at 12:00 pm followed by a Celebration of Life at the Belwood Hall (36 Queen Street, Belwood).

In lieu of flowers, donations in Bob's memory may be made to the Groves Memorial Hospital Foundation or to the Canadian Cancer Society, and are greatly appreciated by the family.