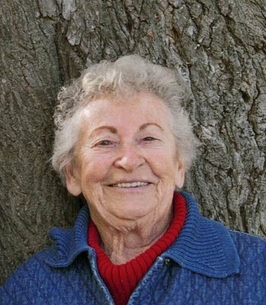 Mary loved dancing and music. Her first experience to square dancing was in the early years of coming to Fergus and her husband got her on to the floor to try it. A picture exists of Mary and Harry dancing on the main street of Fergus on the opening of the Shand Damn, in 1948. Her hobbies were bowling (when the children were small), golf, cross country skiing, swimming, bridge and an avid reader. She enjoyed physical activities and would try just about anything at least once like ice skating (she did the Rideau Canal in Ottawa), downhill skiing which didn’t go well as she went down the hill and into the creek and squash (which she tried until an aggressive play had her falling and splitting open her knee).

Mary enjoyed travelling and her first excursion was to Egypt where she was bitten by the travelling bug resulting in many other tours seeing Britain, Ireland and Scotland, Switzerland, Greece, France and Portugal. Her favourites were Egypt, Italy and China.

She worked at Groves Memorial Hospital and was a long-time member of the Melville United Church and devoted a great number of hours volunteering on various committees mostly fund raising.

A memorial service will be held on Saturday, September 24 at 11:00 am at the Graham A. Giddy Funeral Home, Fergus Chapel. Memorial donations may be made to Groves Memorial Hospital. www.grahamgiddyfh.com