To share your memory on the wall of Jean Kraaijeveld, sign in using one of the following options:

With great sadness we announce the peaceful passing of Jean in her 98th year at her home, Heritage River Retirement Residence, Elora, on Saturday, November 7, 2020.

With great sadness we announce the peaceful passing of Jean in her 98th year at her home, Heritage River Retirement Residence, Elora, on Saturday, November 7, 2020.

Leaving also, her sister-in-law, Jopie Breet (Nico) of the Netherlands and many nieces, nephews and cousins in England, the Netherlands, Vancouver, the USA and Australia.

Jean was born on June 12, 1923 in London, England and enjoyed her early childhood in Chingford, Essex. She proudly served in the Royal British navy W.R.N.S (1942-1945). In London, Jean met her husband Jan, a Dutch naval officer. They immigrated first to the Netherlands and then to Canada in 1954, settling in Toronto.

Jean enjoyed a full and happy life in Canada with family and friends.

Jean worked as a legal assistant with the law firm, Johnston and Douglas, for 30 years and became an involved member of the Law Clerks Association. Many new friendships were made in Toronto, which fostered her love of the arts, including the Toronto Symphony and the National Ballet.

In the early years after arriving in Canada, camping, especially in Algonquin Park and Georgian Bay, became a favourite activity. Soon after, the family built a cottage in Honey Harbour. Jean enjoyed those summers of swimming and canoeing.

In 1982, after retirement, Jean and Jan moved to Fergus. They soon became active, long-time members and friends of the Wednesday bridge club at the Fergus Senior Centre. Jean went on to play in various bridge tournaments, accumulating Master points, a great passion of hers. Later in life, Jean and Jan spent their winter months in Florida.

Sunday dinners of roast beef, Yorkshire pudding and red cabbage or chicken curry and rice at Oma and Opa's were a special event much looked forward to by the entire family. Many recipes have been lovingly passed down. Their home on the river in Fergus was always warm and welcoming for the grandchildren, with lots of fun activities like table tennis, shuffleboard, darts and card games. Oma's competitive spirit was instilled in everyone. Bridge and chess were considered essential as Jean taught her grandchildren the rules at an early age.

In her pastime, Jean was an avid reader, especially of British history, always having a book at the ready to read, one upstairs and one downstairs. Her love of knitting was shown especially by the many beautiful sweaters and special blankets each of her grandchildren received.

Jean will be dearly missed and always in our hearts.

The family would like to thank our dear friend, Dr. John Stickney, for all the excellent care and compassion he has given us over the years, as well as the staff at Heritage River, their kind concern for Jean’s well-being and happiness.

A family gathering to celebrate Jean's life will take place at a later date. As per Jean's wishes, cremation has taken place. In lieu of flowers please consider a donation to the Groves Memorial Hospital. www.grahamgiddyfh.com
Read Less

Receive notifications about information and event scheduling for Jean

We encourage you to share your most beloved memories of Jean here, so that the family and other loved ones can always see it. You can upload cherished photographs, or share your favorite stories, and can even comment on those shared by others.

Posted Nov 17, 2020 at 09:58am
I wanted to reach out to you, Judy, Corben, Johanna, Karla, and Ryan, as I know your Mom/Oma meant the world to all of you. I was lucky enough to have known both Jean and Jan. Jean invited Gary and me to many of the family celebrations. Jean had this incredible ability to prepare a beautiful dinner with ease while also sharing a kind word with everyone. I always enjoyed these meals made with love.
It always struck me how very down to earth your Oma was, and I admired how she appreciated the simple things in life. There was a gentle gracefulness about Oma, which always put me at ease. I observed the unwavering love she had for every single one of you through the years.
Your Oma was able to touch so many hearts.
Thank You for always making me feel welcome, Jean.
Rest In Peace, Oma
Judith Bristow - Baldock ( Mark's sister) 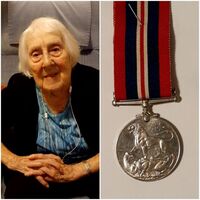