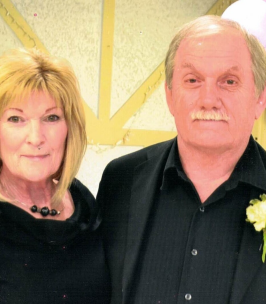 It is with deep sorrow that we accept the passing of Gary James Russell Rogers (69) on August 31st, 2022. With his passing, he will be leaving behind his wife of 49 years Jane Rogers, son Damon and his family Karen, Jakob and Sam Rogers as well as son Devin Rogers. Predeceased by his parents Jim and Jean Rogers and sons Brandon and Dustin Rogers.

Gary’s sisters Sheila (Frank) Dickinson, Linda (Herb) Dolinsek, Joanne (Kim) Beirnes and Lori (Wolf) Wietzke will deeply miss their brother who they always made part of their entertainment, despite his reluctance to participate. Gary will also be missed by the ‘Bell Clan’, Barb (Jim) Hall, Sue (Don) Miller, Bev (Ray) Hoffer and Marg (Gary) Hodder, as well as many nieces, nephews, great nieces and nephews from both the Rogers and Bell sides.

Gary will always be remembered for his participation and involvement within the community especially within the Elora Legion in which he held many positions including president. What his family and friends will know him for is his love for daily shopping (never missing a deal), being someone with a huge open heart who would always champion for the underdog, giving opportunities to those who may not have had them. Gary was also known for his passion for playing poker. He was taught at a young age and developed his skills over time. He welcomed anyone to the table including family and friends right down to his grandchildren whom he had no issues collecting his ‘winnings’ from. The only other place that Gary loved more than being at a poker table was being up at Concession 2C, Chatsworth Township, otherwise known as ‘The Bush’ or how Gary would describe as his ‘happy place’ over the past few years.

Jane, and the kids will always cherish Gary as the ‘site supervisor’ on home renovation projects Gary would start in which he utilized the free labour at home who begrudgingly would lend a hand or at times walk off the site. There are so many memories and stories that we would love to share but Gary known as a ‘man of few words’ would want us to keep this short and sweet.

He left this world with his bucket list full, love for his family and an amazing marriage with his wife. Gary would not want anyone to read this with sadness or sorrow but rather with smiles and laughs at found memories shared. A Celebration of Life will be held on Thursday, September 15th, 2022 from 6-9 pm in the main hall of the Elora Legion. In lieu of flowers, donations in Gary’s memory may be made to the Heart & Stroke Foundation. www.grahamgiddyfh.com