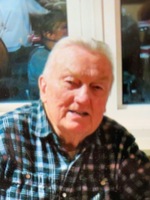 A special thank you to Don’s personal support workers Aila, Donna, Danielle and Enza for their loving care.

Donald volunteered in every community he lived in during his life. He served as member of the Oak Ridges Lions club. He was a founding director of the A.R.C. Industries in Richmond Hill as well as a minor hockey coach. Coach Don is well remembered by the Elora Minor Lacrosse association. He was on the board for the Guelph Wellington Association for Community Living and a supporting member of the Elora Lawn Bowling club. Don volunteered at Wellington Terrace playing cards and performing pastoral care.
He was a Canadian Blood donor where he was recognized for his longtime donations. He will be missed by his friends at Knox Presbyterian Church in Elora where he served as an elder.

A private family funeral service is to be held. A Celebration of Life will be held when family and friends can gather safely together again. Memorial donations in Donald's memory may be made to Knox Presbyterian Church, Elora. www.grahamgiddyfh.com